“Life changing” is how Patricia Eats from The University of Queensland’s School of Veterinary Science describes winning an AgriFutures Rural Women’s Acceleration Grant.

The grant is an AgriFutures Australia program, developed to foster growth and development in women involved in Australia’s rural and emerging industries, businesses and communities.

Ms Eats of Gatton won the bursary for developing a social initiative that will champion animal-empathetic workers passionate about working in Australian livestock industries.

“I was very, very lucky to be a person who was successful,” she said. “It has given me a massive push in the right direction.

“It was such an incredible experience receiving that call and having that sense of reinforcement of the things I am trying to achieve.

“It was amazing to know that the AgriFutures team saw the value and importance in my idea and that they were willing to support such an important cause.

“I was aware of the poor emotional and mental well-being across animal agriculture industries throughout my earlier life and career and recognised the need to do something about that.”

“My social initiative will use existing networks to identify candidates who would most benefit from the services offered through a nomination process, including self-nomination,” she said.

“Ideal candidates are those who demonstrate passion for and conviction to their agricultural animal care roles and who would stay in the industry permanently or long-term if they could.

Ms Eats said the goals, ambitions, skills and interests of each candidate would be used to create a strategy of personal and professional development.

“We’ll do this by using resources, a community of allied technical and professional mentors and other training options to best facilitate the selected candidates’ ideal vision of their career.

“We will use a holistic approach.

“So, if it is animal health, I will partner them with a vet or a training program to develop that aspect of their knowledge and professional skills.

“If personal relationships are problematic, I may introduce psychological or counselling services to help them to master that.

“Or, connection to financial management services to help people to budget their money and be able to benefit from that.”

The goal of this ambitious project is to retain the best animal care professionals within the industry by keeping them in good health, with a clear view of where their careers are heading.

“This will demonstrate the ethic and value that we, as a society, place in having the right people doing animal care work in animal production systems,” Ms Eats said.

Ms Eats will continue to promote her social initiative to wider markets, with a book proposal for a broad, consumer audience under development and set for release this year.

“I intend for my social initiative to start in the dairy industry and grow to include all agricultural animal industries, should it become a viable and popularly supported enterprise,” she said.

“My dream is that my initiative will grow and expand beyond Australia.

“That we will see many deserving people and communities flourish through the cultural embracement of the meaningfulness of the good work of amazing production animal carers.”

After share-farming the family dairy for years, Ms Eats did an Animal Science degree with Honours and raised her son in SA before moving to Queensland to take up PhD candidature.

Her Graduate Certificate in Agricultural Health and Medicine studies confirmed the current policies and practices were inadequate to protect the health and wellbeing of best-fit workers.

“At an academic level, I felt like there were grave misunderstandings of the motivations and purpose of people pursuing agricultural careers,” Ms Eats said.

“Through observing people we employed on our family farm and while working in subsequent roles, I’ve seen broad variability of engagement of employees in their animal care roles.”

Ms Eats said “usually” the degree of personal investment in animal care suggested suitability to a permanent or long-term career in livestock care.

“But, this can be unrecognised and unrewarded in real terms.

“For some employees, their job was really just an exchange of hours for money, rather than an investment of self into that role.

“But I observed that those who fully engaged themselves in their animal care roles still struggled to find stable hours and financial security.

“They’re often under-employed, engaged on a casual basis and with significant seasonal fluctuations to navigate. It seemed unfair.”

“And, I needed it,” she said. “I was at a really dark moment in my life, questioning my direction a little bit and it kind of just . . .

“It’s amazing the way the world turns sometimes. The right thing at the right time can make a massive difference.

“I had a child of my own when I was 19 and very soon after became a single Mum, when he was 8-weeks-old. I think that was actually the making of me.

“I was really determined to succeed and had ambitions that I wanted to fulfill. 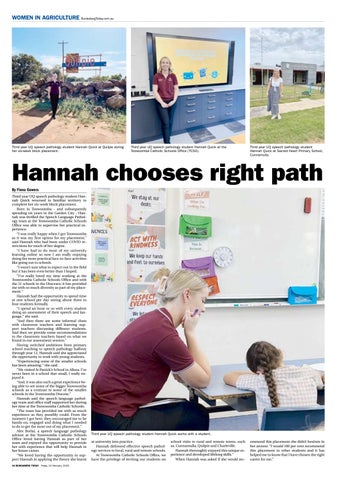 23/05/2022
A Jackson child health nurse has been named the 2022 Queensland AgriFutures Rural Women’s award winner at a ceremony in Brisbane. Rebecca Bradshaw was recognised...

Generations of opportunity in agribusiness

Igniting an idea to support growers